My mother has a knack for developing wonderful recipes.  I would have to say that the ablility to revamp recipes to fit a special diet came from her.  Actually, when I was 13, I suffered from what the doctor called a "nervous stomach".  The symptoms were quite similar to the ones Jacob had at different times during a flare. Not as severe though.  The doctor told my mom to put me on a bland diet.  I remember her being so determined to make things I could eat and not be hungry or miserable until I could eat normally again.  After about 3 months, I returned to a regular diet.  Then when I was 21, we were both diagnosed as Hypoglycemic.  She began, again, revamping recipes to make them sugar free and she has become a pro at it.  One day we would like to put her recipes in a cookbook to at least give to friends and relatives.  But because I like you so much and you have been so good to me... I have decided not to make you wait for the book!  We have made her Apple Pie ( famous around these parts) SCD Legal.  It is so scrumptious and healthy. Would you think bad of me if I told you I let the boys eat it for breakfast some times!

Place a pizza pan in oven and preheat to 350.  Peel and slice apples as thin as you can get them. Put in a large bowl.  Then add all ingredients and mix well.

Pie Crust
(you will need 2 recipes)

In a bowl, put almond flour and add salt.  Slice butter into small pieces and cut in with pastry cutter or two knives.  Make sure it is cut in well.  The mixture will have a sandy look to it when it is all cut in.  Add water one tablespoon at a time. You don't want the dough too wet. If the dough holds together with the first tablespoon of water you will not need the second.  Form a ball and press into buttered pie plate.  Press evenly across the bottom and up the sides. Place in preheated oven on the pizza pan.  Bake maybe 10 min just until crust is beginning to bake.  Remove and add apple mixture.  The second pie crust will be placed in pieces on top.  Press out small amounts and place on top till all the apple mixture is covered.  Place back in oven on pizza pan on 350 for 30 min.  Check if crust has not begun to brown place back in oven for a few more minutes.

This is the most delicious apple pie.  And one of those recipes that makes you feel you are not missing out on anything!  It is also so easy to prepare.  It's as easy as pie!!!! 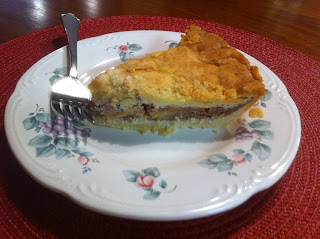 Honey Pie
Hey there!! Welcome to my blog. I am a forty something wife and homeschool mother of two boys. I am very involved in the dietary needs of my family especially the SCD which has helped my oldest son achieve remission from Ulcerative Colitis. We are committed to 100% fanatical adherence. I love the Lord, studying the Bible and serving the Lord. Also, enjoy visiting the many wonderful SCD blogs out there and trying new recipes. The goal of this blog is to encourage mom's who are beginning the diet with their child and to share information on traveling and hiking while on the SCD. To extend to you what we have discovered on our journey to wellness, any thing is possible while staying true to the diet!!! THank you for stopping by. I hope you will visit again.